The conservation efforts of Luna the Labrador 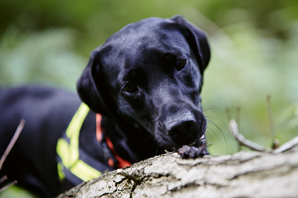 For a delicate dog who is known to walk around puddles rather than get her paws dirty, Luna has a rather surprising day job. As a conservation specialist, four-year-old Luna spends hours sniffing out animal poo!

Not just any old poo, though. Luna and her owner, specialist dog handler Louise Wilson, are currently knee-deep in a unique project to prove the existence of pine martens in Shropshire. These animals are extremely elusive. They live only in forests and are related to otters, badgers and stoats. They came close to extinction in Britain and were given legal protection in Scotland in 1981, but numbers remain low.

'There have been supposed sightings, but we're looking for physical evidence in the form of scats [poo],' explains Louise. 'Luna has already been to Ireland to work on a project there. In six months, the human project leader found 24 scats, whereas Luna found eight in just two days.' In fact, Luna did so well that she appeared on television in an episode of Living the Wildlife.

Luna's impressive talents came as something of a surprise, as she had a tough start in life. Rejected by new owners as a small puppy, who found they simply couldn't keep her, Luna's future looked bleak. But luckily, rather than take her to a dogs' home, those owners returned Luna to her breeder, who in turn donated her to Wagtail UK where Louise works. Wagtail trains detection or 'sniffer' dogs to uncover illegal drugs, cigarettes and explosive devices.

After she was invited to train dogs to find cheetah poo in South Africa, Louise wondered whether Wagtail could also offer environmental work in the UK. The result was Conservation Dogs, launched in 2011, which offers services to biologists, ecologists and conservationists.

Some people are cautious about trusting a dog to undertake wildlife searches, but Louise points out it's much more natural than asking an animal to search for drugs or explosives. However, you do need the right dog.

'In conservation work, the dog has to be motivated by its handler's praise because there are so many distractions,' says Louise. 'The dog also needs to come straight back to the handler after detecting the scent so that there's no risk to the wildlife. A Labrador is perfect because as a breed they are clever, they don't waste their energy and they learn quickly.'

Luna turned out to be a natural. Initially, her nervous nature made Louise think she'd never make a good search dog, but over time her confidence grew, and Louise soon realised that Luna had lots of valuable working attributes - she just needed the right type of work.

'Conservation is ideal for Luna, because it doesn't involve too many people,' says Louise. 'She's naturally quite shy but when she's at work, she's at her happiest. As soon as her harness goes on, she becomes so much more confident and outgoing. Luna is doing amazing things by helping to protect endangered species in the UK. What's even more wonderful is seeing how it gives her such an obvious sense of achievement.'

Taken from the Autumn 2013 edition of PetPeople magazine