Why does my pet have whiskers? 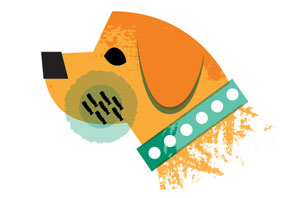 Pets are intriguing, which is part of the joy of ownership. Questions about why they do certain things or why they have certain features are abundant. Take whiskers for example; why do our pets have them? Here we investigate the science behind something seemingly so normal.

As ships and aeroplanes have radars, pets have their own navigational tools - whiskers. Vibrissae, as they're technically known (from the Latin vibrare, to vibrate) aren't just cosmetic, but are extraordinary sensory devices that help our furry friends explore and understand the world.

Almost all mammals have them, although vibrissae are the only hairs that humans have completely lost. Their roots run far deeper into the animal's skin than the fur on the rest of the body, and connect with many more nerve endings. Sensitive to vibrations as well as touch, whiskers tell our cats, dogs or rabbits a lot about the size and shape of nearby objects in the dark. The neural 'pathways' that carry information from the whiskers to the brain are similar to the pathways that transmit messages from our human hands to our brain. In fact, vibrissae have been likened to having fingers growing out of the face!

Vibrissae grow most visibly on animals' faces, clustered in three main groups - above the eyes, on the sides of the cheeks and further back on the cheeks. Different breeds have different types: some curly-haired dogs (such as the Bedlington Terrier) and cats (such as the Devon Rex) also have curly whiskers. Dogs have up to 20 whiskers on each side of their upper lips, while cats average 12 on each side of their noses. Like cats, a rabbit's whiskers are as long as the body is wide, which help gauge the width of openings in the dark - handy in underground warrens! Whiskers above the eyes provide a blinking reflex, so if something flies at the animal's face, their whiskers signal to their brain to close their eyes quickly. For cats, shorter whiskers on the back of the front legs help them land safely and detect prey.

Whiskers may - along with other body language, such as the position of the ears and tail - give clues to a cat's mood. If the whiskers are relaxed and sticking out sideways, they're calm; pushed forwards, they're excited and alert; flattened against their cheeks, they are angry or scared.

Whiskers fall out and re-grow naturally. Never cut or remove them as pets need their whiskers, and without them may become disorientated or insecure. Luckily, rabbits, dogs and cats aren't like squirrels, which can't usually maintain balance without their whiskers.

Written by Deidre Vine for the Autumn 2013 issue of PetPeople.

Why not read our three-part series on the history of cats, dogs and rabbits to find out more about your furry friends.

Do any of your pet's features baffle you? Or are you a whiz with common pet questions? Let us know in the box below.

Share via Email Share via Email Share on LinkedIn Share via whatsapp Share on Twitter Share on Facebook Share this article:
Back to top
Stan & Sid's mum
Thanks for the really good article, which confirmed my understanding of the function of whiskers (as well as being really beautiful, of course...). However, that leads me to ask: why are idiot breeders still allowed to clip their dogs' whiskers for prominent shows such as Crufts? (and if they do it there, you can bet they do it at smaller shows around the country).Based on what you've written above, clipping whiskers is basically as barbaric as docking tails or cropping ears. Why can't people just love animals the way they are, without torturing them into some idealised version of themselves?
Posted on: January 23 2014
Kevin Fussell
I recently saw on a BBC documentary that cats' whiskers are there to help them find their way close up as they are long sighted and can't see anything within about 25cm. Is this true?
Posted on: February 03 2014
Barry Abbey
Why does my cat NOT purr or sit on my knee when he will sleep on the bed with us.
Posted on: February 07 2014