How Cats Can Affect Personal Relationships

February may be the time of celebrating love between couples, but as all pet owners know, the bond between humans and animals is just as special. So, we've rounded up research and expert advice to gain insight into what we can learn from our bond with cats, and the positive impact it can have on our other relationships, too.

When did the bond begin?

Your cat's purr and loving head butts are two things that make your heart melt. But did you know that your own affection for your pet could go even deeper? According to research, it could be in your genes.

'The idea of having animals in our homes is ancient,' says Dr John Bradshaw, author of The Animals Among Us and research fellow at Bristol University Veterinary School. He explains that pet keeping dates back 50,000 years, and research shows that hunter-gatherers across the world found animals while hunting and took them back to live in their settlements. 'We seem to have evolved to want to look after animals in similar ways to looking after human babies,' he explains.

Dr Bradshaw believes there's a genetic basis to this, and that some of us are genetically predisposed to liking animals. In fact, he thinks that our pets may have become domesticated because of this affection: 'Domestication wouldn't have gotten very far if we had no affection towards animals,' he says. 'A love for cats meant that hunter-gatherers kept our pets' ancestors with them all the time, ensuring that each generation of cats became more domesticated.'

The evolution of keeping pets

Historically, pet keeping served an important function: animals had to be useful. 'They were essential for our ancestor's survival,' says Dr Bradshaw. While dogs helped with hunting and protecting settlements, cats caught rodents. Even in ancient Egypt, where cats were worshipped, they had an important function: 'Cats were thought to provide protection from snakes, and Egyptians thought that having a pet cat in the house would keep reptiles away.'

Now, of course, cats have become our companions who we treat as one of the family. Dr Bradshaw believes that's why many of us now use human names for our pets - it's an unconscious reflection of pets evolving from working animals to family members. And the evidence backs this up: according to Findcatnames.com, the most popular cat names in 2017 included Felix, Bella and Daisy, while in the early 1900s popular cat names were based on physical appearance, such as Sooty and Misty.

Pets and our relationships

Today, our bond with our cats is as strong as ever, and there's evidence to suggest it can have an impact on our human relationships, too. 'Pets have the ability to help strengthen relationships,' says Michael Hamilton, a veterinary orthopaedic and neurosurgeon. 'They help us to be more patient, caring and loving towards one another. The unconditional love you receive from a dog or cat is extremely rewarding. It can influence us to behave in the same uplifting way with our partners.'

In fact, research by the University of Buffalo found that couples with pets had closer relationships and responded better to stress than couples who didn't, while a 2017 survey by Elite Singles found that 57% of Brits found singletons with pets more attractive than those without.

True story: how one owner's cats helped her find love 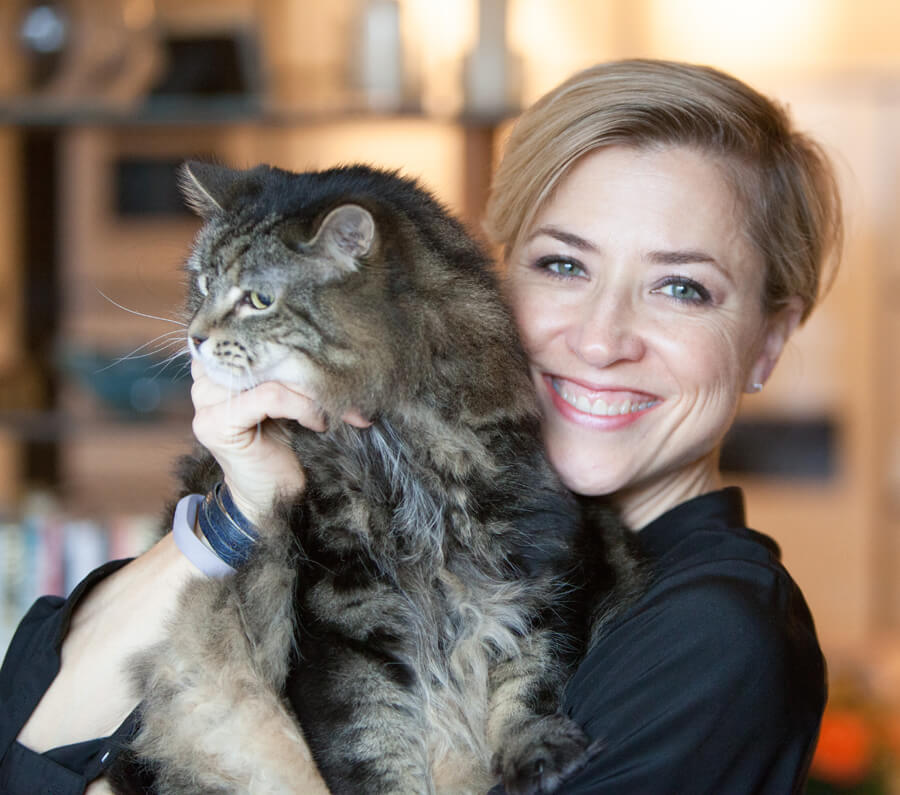 'I was pretty serious about this guy I was seeing several years ago,' says Gabrielle, who owns CatDogFish.com, an online health and wellbeing platform for pet owners. 'We'd been together for a fair amount of time, but he was allergic to cats. He just assumed that in order for us to stay together I'd give up my pets, while I thought that he'd take allergy medication. His assumption was just so foreign to me; I hadn't even considered the notion of not having my cats in my life.'

Gabrielle realised the relationship wasn't destined to last. 'I was heartbroken, but it helped me to see how important it was for me to find a partner who loved animals as much as I did,' she explains. And she's now happily married to someone who is as devoted to her pets as she is. 'I met my husband in New York,' she recalls. 'We had a conversation about moving to the UK together very early on, and he understood that my cats would come, too. We spent time, effort and money to get everything sorted, including papers, vaccinations, quarantine, and plane tickets for them. That really deepened my love for him, and showed that he was the one for me. In a strange way, I have my cats to thank for finding someone I'm so well aligned with!'