How do cats communicate with their tails

Cats are expressive, but can we really decipher what they’re saying? Feline body language can often be misinterpreted, so learning to read your cat’s postures and movements may help you to understand her moods and emotions. Justine Harding explores body language, focusing specifically on the tail.

Our cats’ solitary ancestors principally used scent to communicate. But with domestication came closer proximity to other cats, as well as humans, so visual signals became more important. The highly mobile tail is a great signalling tool and can help us understand what a cat is feeling or intending. Here are three common tail movements you will be familiar with, and what they could mean:

The best understood tail signal in cats is the tail held up vertically, sometimes with the tip slightly curled. A researcher from the University of Southampton presented cats with life-sized cat silhouettes with tails in different positions. When the silhouette showed ‘tail up’, cats approached more quickly and frequently reciprocated the signal. In effect, it says ‘I’m friendly’, and thereby reduces the risk of a fight. If your cat greets you or other cats in your household with her tail up, it’s a clear sign of affection. 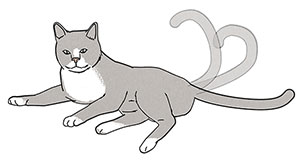 Tail movement can also tell us about how a cat is feeling. Strong movement often signals strong emotion. A tail lashing from side to side and thumping on the ground indicates your cat is highly aroused and it’s time to leave her well alone as aggressive behaviours are likely to follow. This may be during play or hunting (positive emotion) or due to frustration and anger (negative emotion) – but either way, she is charged and ready to act. Conversely, soft, fluid tail movements indicate a lack of tension. Take note of clues in the environment and overall body language to get a clearer indication of the message intended. 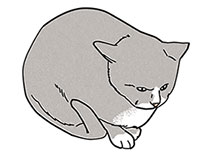 Cats that are relaxed appear loose and open, whereas a cat that does not wish to interact will withdraw. This is most clearly indicated when a cat’s tail is wrapped around her body or tucked underneath instead of lying loose on the ground, extending away from the body. She may just want a rest or be a bit chilly, but a wrapped tail could also signal anxiety. To decipher which it is, look at the whole picture and the setting. Is it cold? Is your cat snuggled down with her nose tucked in for warmth? Or, is her tail held tightly around her body or awkwardly just above the ground, indicating tension? Do her eyes appear soft and blinking (relaxed) or wide and staring (aroused)? Watch, too, when your cat moves – a tail tucked between her hind legs indicates she feels threatened and may lash out.

Although the tail is an excellent way to help understand your cat, it’s important to remember that ‘reading’ just the tail is like picking odd words out of a sentence – you may get the main gist but you could easily misinterpret what’s being said. You will get a greater understanding of your cat’s mood and emotions by observing her tail movements alongside her entire body language and the environment she’s in.