Is your dog’s poop healthy?

Aside from being something you have to scoop up on walks, your dog’s poo can provide clues about his overall health. Here, Petplan vet Brian Faulkner reveals the different appearances that your pet’s faeces can take – and what each could indicate. If any abnormal symptoms or signs continue for more than a couple of days, it’s always worth paying a visit to your vet to get your dog checked out. 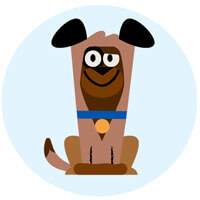 The ideal shape is cigar-like (length generally correlates with the size of our dog), with shallow splits in that would cause it to break apart if moved. It should be fairly soft in consistency, like that of silly putty, and chocolate brown in colour.

In terms of coating, ‘there is a natural degree of mucus production to lubricate the passage of the poop,’ Brian says. ‘If the poo is formed normally and has a mucous film, it’s usually nothing to be worried about. But if the poo itself is looking softer and has an amount of mucous, it can be a sign of an inflamed bowel. There might also be flecks of fresh blood as well.’

Adult dogs usually pass stools at least once a day, whilst puppies may do so several times over the same period. 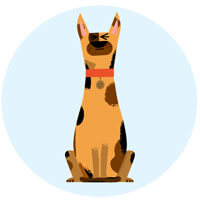 Very hard, dry, small pieces of poo may lead to your dog becoming constipated. You may notice he isn’t going to the toilet as often as normal, or is having trouble doing so. Constipation can occur due to dehydration, poor diet or older age, though can also indicate a medical problem when occurring over a prolonged period.

However, while straining to poop can be a sign of constipation, it’s important to ensure this symptom isn’t mistaken for an alternate issue. ‘More so than cats, dogs are prone to physical obstructions,’ states Brian. ‘If a dog gets access to bones, for example, the calcium can cement and accumulate, causing a blockage in their rear end.

‘Dogs sometimes also strain to poo, not because there’s nothing actually there to pass, but because their bowel is “burning” due to inflammation – a sensation known as tenesmus. It can be hard for owners to tell the difference between tenesmus and genuine constipation, but the vet can help determine that.’ 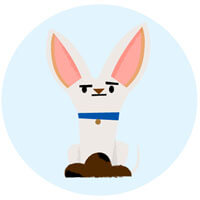 ‘In veterinary terms, we define this as any poo that’s less solid or viscous than the “ideal” stool,’ explains Brian. ‘Owners sometimes assume that, unless it’s like water, it isn’t diarrhoea – which isn’t the case. If it’s of a yoghurt-y consistency, or like a mousse, then this would be classed as diarrhoea.’

Diarrhoea can range in colour, too, “from bright yellow or orange to brown, black or red,’ Brian says. Most bouts of diarrhea are short-lived, not serious and often resolve in a couple of days. However, if it lasts longer or has a ‘“tomato soup-like” appearance, then it is something that needs to be urgently seen by your vet,’ he adds.

The most common cause of sudden onset diarrhoea in dogs is something that has upset the normal digestive flora of the intestine. However, prolonged symptoms could be the result of infections of a food intolerance, as well as parasites or an inflammatory bowel disease.

Dogs’ poo should have a mildly noticeable odour, but nothing too foul smelling. Poor diet can cause stools to be more pungent, as can a raw food diet – because it takes longer and more effort for your dog to digest. If a change in diet doesn’t improve the scent, then it could be a sign that your dog has an underlying issue – such as irritable bowel syndrome, parasites or a digestive infection.

‘Diarrhoea which includes digested blood tends to have a distinctive “metallic” smell,’ says Brian. ‘But a bad smell alone isn’t anything to be too concerned about, unless it occurs alongside other symptoms, such as a change in colour or consistency. That is when the scent becomes more noticeable and is potentially indicative of a problem.’ 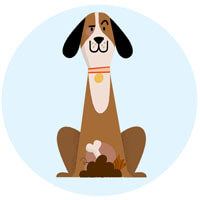 Sometimes you might notice odd-looking things in your dog’s poo – ‘everything from bone and string to wood,’ reveals Brian. ‘It’s thought that 80 to 90 percent of foreign bodies will pass through the intestine uneventfully. Though, obviously, they can cause a blockage; especially objects which are spherical or linear.’

Dogs that groom a lot can sometimes have clumps of fur in their poop, although this can also be seen in those with allergies. However, little white flecks resembling grains of rice are usually remnants of tapeworm, and should be queried with your vet. 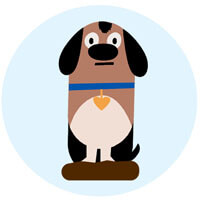 As mentioned previously, black, red or very dark brown poo is a ‘sign of digested blood,’ Brian states. ‘Whilst this can be a sign of intestinal bleeding or ulcerations, this is relatively rare.’

Faeces can also appear in several other colours, from yellow to green to white. ‘I’ve stopped being surprised by the range of colours dog poop can come in,’ says Brian. ‘A vet can’t look at the shade of poop and automatically diagnose which condition is causing it, as the colour alone rarely tells us anything specific.’

Vote for us in the Moneywise Awards

Moneywise magazine is looking for the UK's best financial service companies for customer service. Have your say in this year's Moneywise Customer Service Awards survey and you could win a £1000 cash prize.