How Does An Assistant Dog Offer Emotional Support?

After suffering a head injury, Megan Taylor's life changed forever and seemingly simple things, such as festive season celebrations, suddenly became far more complicated. She tells us how her seven-year-old dog, Ruby, has helped her cope.

'Everything changed just before Christmas six years ago'

While the festive season should be full of cheer, it can be a difficult time for many. In fact, new findings by mental health charity Mind show that more than half of people are negatively affected by the pressures of Christmas.

Thankfully, our pets are on hand to help. A recent study by the Mental Health Foundation found that 76% of pet owners felt they could cope much better with stressful situations thanks to their dog, and 87% of respondents said their pet had a positive effect on their overall wellbeing.

This is especially true for Megan Taylor, who suffered a life-changing injury in 2011. 'My family got Ruby, a Border Collie Australian Kelpie cross, as a puppy and we enjoyed doing all the things you usually do with your pet - going for long walks and learning new tricks. Ruby was just the family dog but, when she was a year old, I fainted during a Remembrance Day service and hit my head against the kerb, fracturing my skull. That's when everything changed.'

'I struggled with having to rely on others'

'My injuries left me with side effects, such as profound hearing loss and fainting - sometimes up to 50 times a day. Routine tasks that I once took for granted, like bending down to pick something up, would make me very dizzy and I felt anxious never knowing when I might suddenly pass out without warning. Not only was this frightening, it was also a huge blow to my confidence, as I now had to continually rely on others for help.

'I found the festive season especially hard to face, as normal activities such as going shopping, suddenly became far more difficult. The extra large crowds were very disorientating. People would bump into me and, as my balance isn't great, sometimes I ended up on the floor. And there was no way that I could browse for presents, as bending down to reach something off a shelf inevitably led to dizziness. Simple things, like crossing the road, were no longer easy and my biggest fear was that I'd faint in front of a car while trying to get across.' 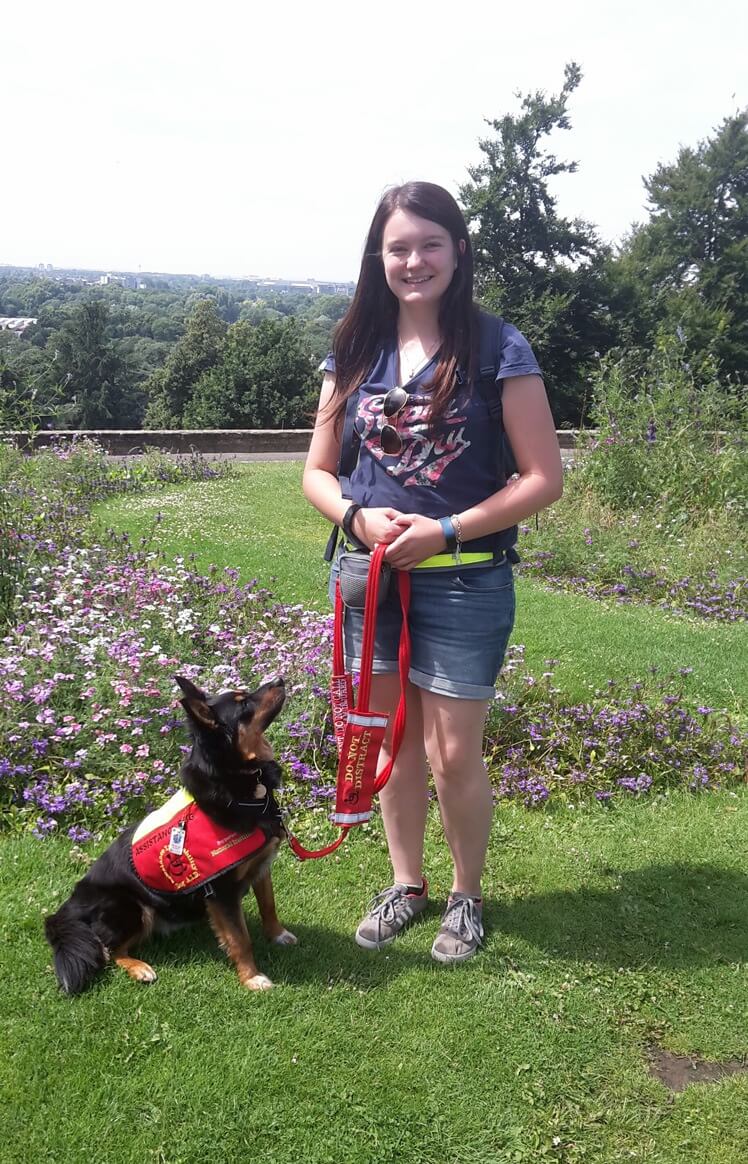 'Ruby came to my rescue'

Although I was facing a future with lifelong disabilities, I didn't want to let my medical condition stand in the way of success. So, after school and college I went to university to study a science degree in animal behaviour and welfare. But, despite my positive attitude, I still struggled with everyday tasks and wondered how I would ever live independently.

That's when I discovered Dog A.I.D, a charity that helps people with disabilities train their pets to become Assistance Dogs. Ruby was five by then and already knew a lot about basic obedience, and her calm nature was an advantage. With the help of trained professionals, who work as volunteers for the charity, Ruby and I completed the training in a year.

Now, although I still live at home, I don't have to rely on my parents for help. Ruby can untie my shoelaces, pull off my socks and trousers, pick up anything I drop and pull my clothes out of the washing machine. More importantly, she keeps me safe: when I faint she can push a button to alert my emergency contacts, and she's trained to open the door to paramedics should the need ever arise.

Ruby's also allowed me to feel more confident about going out alone and even Christmas shopping is less stressful, as people allow us more space and she can fetch items from a store's lower shelves. What's more, people are far friendlier once they see Ruby in her red and yellow jacket. She's a great ice-breaker!

Ruby finished her training in March, so this will be her first Christmas as my official assistance dog. So when we raise a toast this year, it will be to my amazing dog. She's not only taken the stress out of Christmas, she's given me a wonderful gift: a future I can look forward to.'