7 tips from a rabbit show winner

Competing in shows can be a lot of fun for both you and your bunny. Here, Dave Gallagher, whose rabbit won Best in Show at 2017's prestigious London Championship Show (the UK's top competition for small animals) shares his tips for success.

Breeding and showing rabbits is in my blood. My dad kept rabbits and I used to enjoy helping him clean them out. I entered my first show when I was eight years old, but didn't win anything until a few years later. That first show taught me not to be a sore loser and to keep on trying - a lesson you're never too young (or old!) to learn.

I've now shown rabbits for nearly 50 years, and my hobby has taken me all over the world. These days, I specialise in Polish rabbits and have 40 of them in hutches in my heated garden shed. I knew my Polish buck, The Real McCoy, who's three now, was something special straight away. He was so clean, perfectly formed for his breed, and had a lovely gentle nature, too. I started showing him when he was five months old and had a lot of success, but beating 1,500 other rabbits at the London Championship Show was a dream come true. 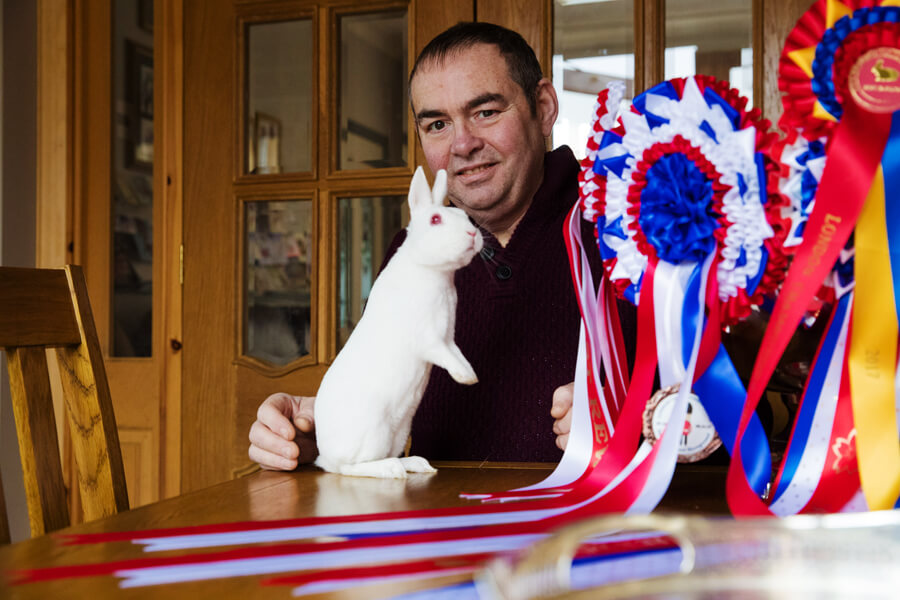 Shows are the best places to speak to owners and pick up tips. You can find show listings in Fur & Feather, the official British Rabbit Council (BRC) magazine. Any rabbit can enter a pet show, but if it's a BRC show you'll need to join up.

3. Condition your rabbit in the months leading up to a show

While you're probably ensuring your rabbits get all the right nutrition already, conditioning them for a show often means keeping an even closer eye on what they eat. There are lots of fancy mixes and treats on the market, but I use an unmixed, high-fibre rabbit pellet, supplemented with crushed oats and nice clean hay. I'm not a fan of muesli-style treats or even shop-bought fruit and veg, as you don't really know what's in them. For a treat, I'll give my rabbits herbs I grow in my garden, such as sweet cicely.

4. Get into the grooming habit

While you might already groom your rabbits to improve the condition and texture of their coats, grooming them in the run-up to a show will also help them get used to being handled. A relaxed rabbit makes it easier for a judge to evaluate and see its best qualities. I handle my rabbits at least three or four times a day in the weeks leading up to a show, and I find that it's always been a good way to build up trust. It also allows me to find out more about my rabbit, and the noises he makes when he's happy or not.

My tip for cleaning a rabbit is just to run your hands under a tap, shake off the excess water, then run them through your pet's coat, getting rid of any dead hairs. If your rabbit has a moult in the weeks leading up to a show, try not to groom that area as it could fall out and leave a patch.

5. Get your rabbit used to sights and sounds

As long as your rabbit is introduced gently, say two to three shows a year, he'll get used to the environment. However, shows are noisy places and a nervous or aggressive rabbit won't perform well. I train my rabbits by having a radio on in my shed night and day, to get them accustomed to different sounds. I'll practice posing them too, as some breeds are posed in a specific way. The Polish ones sit up, so I'll put one hand under their chins, and the other on their backs to allow their legs to go nice and straight. But don't attempt this with rabbits less than four months old, as their bones are still soft and you may hurt them. I'll let my rabbits see their reflection in a mirror too, so they're used to the sight of other animals.

6. Get your rabbit polished up on show day

On the day of the show, I'm up early making sure my hutches and rabbits are spotless. I'll thoroughly groom my bunnies and make sure to get into all the awkward places, such as under the chin, the inside of the legs, and around the bottom. If I notice a white rabbit has a mark on its coat or ear, I'll dab on some cornflour using my thumb. I transport my rabbits in clean carrying boxes containing fresh bedding, and I always have water for them. I wait until judging has finished to feed them though, as a big meal can bulk them out and spoil their chances.

What makes a champion is a matter of opinion. Every breed of rabbit has its own standard of perfection, and a champion will come the closest to that standard. We love our rabbits as they are, but a judge will look at things like the shape of a rabbit's head, the size and position of their ears, their coat and their behaviour. But don't lose heart if you don't make the grade, as every judge's opinion is different. With time and practice, your pet may still be a winner.