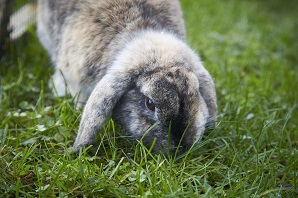 Just like humans, rabbits are incredibly social animals who thrive when they have company to play and bond with.

When found in the wild, these highly sociable animals naturally live together in big groups – so keeping your bunny on their own is depriving them of a fundamental need to be in the company of their own kind. Therefore, it’s vital you keep rabbits in pairs to keep them happily bouncing around so they avoid becoming lonely or stressed.

Why do rabbits need company?

Rabbits who live in big groups, or in pairs, are generally a lot happier than rabbits who are kept alone. For lone rabbits, it’s not uncommon for them to become bored, lonely and sometimes even depressed.

Rabbits enjoy having other rabbits around them to be able to groom, eat and play together. They are also well attuned to each other and are able to pick up each other’s moods and keep one another happy.

If you are concerned about the increased cost involved in keeping an extra rabbit, it shouldn’t be too dissimilar with them sharing shelter, food, water and toys. The only area where you may notice a difference is the occasional cost of an extra vaccination.

Which rabbits work best together?

The easiest way to bond rabbits, is by either choosing a male or female from the same litter, ensuring you have them neutered before any fighting occurs or by choosing two rabbits from different litters but who are around the same age – between 8-10 weeks.

Once rabbits bond, they rarely venture away from each other. They groom each other and eat and sleep together. If you need to take one of the rabbits to the vets, always take them together as they seek comfort in each other when stressed.

What to do if your rabbits fight

On rare occasions, rabbits may start to fight. Often, if you have had them since birth, they may have reached sexual maturity and require neutering to prevent their hormones kicking in.

If they have been introduced as adults, they may require a period of bonding to learn to trust each other. There are a series of slow approaches and exercises that you can practice to help the bonding process between two rabbits.

If you already have a rabbit, some rescue centres will let you take your bunny in with you to choose their new pal. They will be able to show you which rabbit they get along with the best to avoid any mismatches amongst the group.

Do you have more than one rabbit? Do you have any advice for anyone looking to pair their rabbit? Leave a comment below…

Share via Email Share via Email Share on LinkedIn Share via whatsapp Share on Twitter Share on Facebook Share this article:
Back to top
Catherine Wooding
A brilliant blog! Our two bunnies are so much happier in each other's company.Love, nose licks and waggy tails from WildPaws. www.facebook.com/wildpawspics
Posted on: January 31 2017
Ann Murray
Our rescue rabbit who is over 6 yrs old has bonded with out 9 weeks old puppy
Posted on: February 15 2017
vanguardind.com website cost
My developer is trying to persuade me to move to .net from PHP.I have always disliked the idea because of the expenses.But he's tryiong none the less. I've been using Movable-type on various websites for about a year and am worried about switching to another platform.I have heard fantastic things about blogengine.net.Is there a way I can transfer all my wordpress posts into it?Any kind of help would be greatly appreciated!
Posted on: May 06 2017