What to do about pet toileting problems 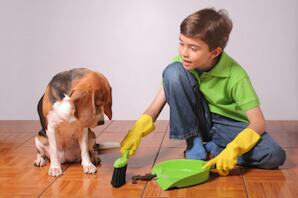 You never know when your pet might become a toilet rebel. But what’s behind it, and what can you do? Deirdre Vine investigates.

‘Inappropriate elimination’ – two sinister words that strike fear into every pet owner – can happen out of the blue, even with the most domesticated, well-trained animals. It’s certainly not uncommon, but it’s vital at the onset to rule out any underlying medical reason for the toileting dysfunction.

As any vet will tell you, much of their job seems to involve discussions about pee and poop. In a career spanning 30 years, vet Peter Culpin of the Pets Naturally surgery in London’s Notting Hill has seen it all.

‘Many years ago, a client of mine couldn’t understand why his newly acquired rescued female dog couldn’t stop weeing indoors and out,’ says Peter. ‘On examination, we found that she had developed cystic calculi, or stones in her bladder. This is usually the sequel to a long-standing bladder infection and must have been very painful for her. She underwent surgery to remove them and we found she had more than 400 stones of various sizes in her bladder.’

He warns: ‘Aside from the obvious risk of getting “caught short”, if your pet suddenly starts exhibiting unusual soiling behaviour, don’t just assume he has forgotten his training.

‘There is usually a very good underlying reason and the most common is a urinary tract infection, so get help early, otherwise your pet may end up with an even worse problem. If all medical reasons for your pet’s inappropriate soiling have been ruled out, then it may be that the problem is a behavioural one.’

MIND AND BODY
Stress plays a major part in behaviour changes in cats. However, we owners sometimes take an overly humanised view of toilet malfunction. Abby Ward tells how when she went away for a few days her partner discovered that their cat, Phoebe, had burrowed into a wardrobe and peed in Abby’s best handbag. ‘I felt she was punishing me for leaving,’ says Abby.

Dr Claire Corridan, a vet with a special interest in behavioural medicine, sees the likely explanation for such moggy misdemeanours very differently.

‘Cats have no comprehension of revenge or malice,’ she says. ‘Owners sometimes underestimate the stressful effect they’re having on their animals. Depositing a substance containing their smell and pheromones is a pet’s response to the stress of the situation.’

Claire says that whereas an odour is merely something humans consider pleasurable or offensive, our pets’ world revolves around pongs – they’re motivated and driven by scent morning, noon and night. ‘If an animal is feeling stressed for any reason, the one thing they’re going to do is make sure they express their scent to try and override that.’

In addition, says Claire, we underestimate just how much the emotional and mental state of our companion – whether it’s a cat, dog or rabbit – can affect their short- and long-term health, both mental and physical. ‘Stress directly affects the part of the bladder that makes the animal feel uncomfortable and can also affect the musculature, which increases the risk of incontinence, so you have two different physiological mechanisms that are directlyrelated to how the animal is feeling,’ she explains.

The majority of behavioural cases at Claire’s Lanarkshire practice are related to the pets’ environment. ‘If we got that right, we’d prevent a lot of the problems that we end up seeing,’ she says. ‘If their surroundings are too restrictive, lacking in mental or social stimulation, or excessively social, a cat, dog or rabbit is going to have difficulty coping with that.’

AVOIDANCE TACTICS
Soiling outside the litter tray is one of the most common reasons for a healthy cat to be given to a shelter, yet in most cases it can be easily overcome.

Using a non-ammonia-based cleaning product on the tray is recommended. ‘Never use a “deep litter” system,’ advises Peter Culpin. ‘Scooping out the solid clumps of litter is not a satisfactory way of managing your cat’s toilet. 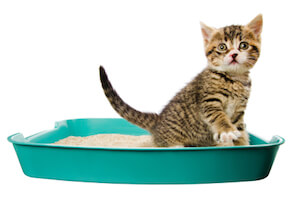 ‘Place a layer of paper or a liner in the tray and add about half an inch of litter. When it is soiled, throw the whole lot away, clean the tray and replace the liner and add fresh litter. This simple measure recently saved a wealthy client of mine with a lavishly decorated home thousands of pounds.’

Cats, like us, appreciate privacy but a cat going to the loo outdoors also wants to feel secure. Ipswich cat owner Jim Best reports how he noticed that a new moggy in the neighbourhood liked to sit on the wall eyeing his cat flap, thus making his puss suddenly reluctant to toilet in the garden.

Cats, more than dogs, will soil one part of the house over and over again. ‘Products such as Feliway are a great help when cats begin to mark the house through stress, as are special calming diets containing amino acids such as L-Tryptophan and L-Theanine,’ says Peter.

Karen Wild is a dog trainer, behaviourist and founder of Intellidogs, which specialises in online advice. She cites one commonly reported cause of inappropriate elimination. ‘Dogs can sometimes be left alone for so long that they need the toilet in the middle of the day and no one’s there to let them out,’ she says. ‘They eliminate in the house because they simply cannot hold it in.’ Separation anxiety may actually compound the problem.

Moving house sometimes initiates toileting shenanigans and some remedial house training might be needed following a move, in order to remind the dog of the desired place for them to go.

Beverley Cuddy, editor and publisher of Dogs Today, recalls one incident of ‘inappropriate elimination’ having an unusual payoff. Her beloved (late) Bearded Collie, Sally, used to go to work with her.

‘One evening, a colleague and I had a late meeting with an unpleasant character who owed us money,’ she remembers. ‘We’d been trying to negotiate but the atmosphere became increasingly tense. Then Sally intervened. She turned her back on him and sprayed diarrhoea in his direction. Sally had created a diversion as only she could.’

Beverley adds that, in general, ‘Sally was a dog who had a lot of excuses. She’d been very ill, missed all her socialisation and was very high maintenance. The slightest upset went to her bottom; sometimes she’d poo so much she’d end up on a drip at the vet’s. If you can’t control the continence of your dog it’s socially embarrassing and hard to live with.’

But thankfully for pets and owners, help is just a trip to the vet’s away.

Do you have your own pet-poop story to share? Let us know by commenting in the box below.