Why Do Dogs Roll in Poop? 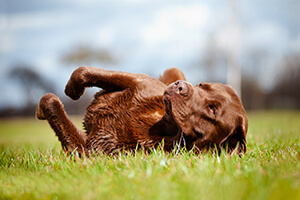 Why Do Dogs Roll in Poop?

All dog owners will be familiar with taking their pet for a walk, letting them off their lead, and finding that they run directly to a pile of animal excrement just to roll in it. This can be very frustrating, turning a nice walk into a chore with the clean-up afterwards.

Why dogs do this remains uncertain, however there are several theories. Many of the theories around dogs’ motivations for rolling in poo focus on the behaviour as being a ‘genetic hangover’ from an earlier evolutionary stage. Covering themselves in excrement may have served a purpose for the wild ancestors of our domesticated dogs.

Here, Petplan explores these explanations, so that you can gain a better understanding of your pet’s motives for rolling themselves in poop.

The first theorised purpose is camouflage. The behaviour of close but wild relatives of domestic dogs has indicated this. Modern wolves have also been observed rolling in the faeces of other animals. It is thought that they may do this to cover their scent from their prey, helping to hunt.

Meanwhile, grey foxes, another close relative of domestic dogs, have been seen covering themselves in the urine and excrement of larger predators, such as mountain lions. In coating themselves in the scent of the largest predators in their environment, it is thought these foxes may be trying to hide their scent from predators.

Our domesticated dogs may therefore share this instinct to camouflage themselves, as a ‘genetic hangover’ from when they were wild and needed to hide from prey or predators.

Another theory as to why some dogs seem to enjoy rolling in excrement is communication.

Dogs do have a far stronger sense of smell than humans and so it seems natural that smell may play a larger role in their social interactions. Therefore, when your dog is rolling themselves in faeces, they may be doing so to communicate to other dogs in their territory.

The final theory suggests that a dog’s desire to roll in poop is part of an instinct which is still very much important to them rather than a genetic hangover. They may be marking territory with their scent.

We all know of dogs urinating to do this, but some scientists have argued that rolling in the faeces of other animals is a dog attempting to mask the smell with their own scent.

This is considered one of the less likely theories, as dogs have more effective methods for marking their territory, such as urination. It seems strange they would use a less effectual method when they don’t need to.

Can You Stop Your Dog Rolling in Poop?

The simple answer to this is no. Whatever their reason is for doing so, rolling in excrement is a normal and unavoidable canine behaviour.The best thing you can do is know how to clean them properly after. Make sure you have a good odour-eliminating dog shampoo. There are many on the market now that contain orange oil, which is recognised by many experts as a safe and effective deodoriser for dogs.

Do you have any tips for dealing with your dog rolling in poop? Let us know in the comments below...