Stomach Bloats in Dogs | Stories From The Surgery 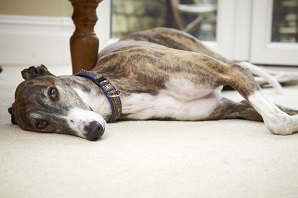 Petplan vet Brian Faulkner has once again taken time out of his busy schedule to tell us all about some of the strange, funny and sometimes difficult things he encounters in his surgery.

This month, he tells us of a recent sleepless night because of a dog with Gastric Dilatation Volvulus…

Last week a dog called Shirly was brought into my surgery by their worried owner presenting symptoms that included retching and a bloated, painful abdomen.

After an initial full clinical examination, I concluded that Shirly was suffering from Gastric Dilatation Volvulus. This is an illness that’s far more common than many people realise and can have some very serious repercussions if it isn’t treated promptly.

This is what you need to know…

What is Gastric Dilatation Volvulus?

Gastric dilatation Volvulus (GDV) also known as a “Stomach torsion” or “twisted Stomach” is a rapidly progressive disease that affects dogs and is more commonly seen in large, deep chested breeds such as German Shepherds, Great Danes and Standard Poodles.

Commonly known as a “bloat” it is an extremely serious condition that occurs as a result of the animal’s stomach dilating and then rotating, or twisting, around its short axis. As the stomach begins to dilate and expand, the pressure in the stomach starts to increase. This gastric rotation causes some very serious issues, including:

It typically occurs after large meals causing the stomach to dilate due to food and gas, or too much activity after eating. The dilation and expansion of the stomach causes the pressure in the stomach to accumulate.

Symptoms and signs of GDV include anxious behaviour, depression, abdominal pain (the dog may take up a ‘praying’ position whereby they stretch out their front legs so their elbows touch the floor, whilst the back is arched up in the air), excessive drooling and vomiting to the point where nothing can be produced. As the disease advances, your pet may begin to pant, have abdominal distention (bloated belly), or be weak and collapse.

Other physical symptoms include:

Stabilization and surgery are best performed when in the early stages of the disease, mortality rates tend to increase with the severity of the disease.

How is Gastric Dilatation Volvulus treated?

During treatment, rapid stabilization of the dog is key. Giving oxygen and intravenous fluids are usually the start of treatment.

Gastric decompression then follows and is a process whereby a tube is passed down the oesophagus into the stomach if possible to release the air and fluid accumulation. This may not be possible if the stomach is completely twisted which was the case with Shirly. Decompression was achieved by inserting a large needle through the abdominal wall into the stomach and allowing the gas to escape.

This can be followed by flushing water in and out of the stomach to remove remaining food particles. Surgery is often necessary to replace the stomach to its normal position and is typically fastened to the inner abdominal wall to help prevention of GDV happening again. Shirly’s spleen was also twisted as part of the torsion and thus had to be removed. This is not an uncommon associated complication.

During post treatment, most pets will be kept in hospital and given intravenous fluids for several days and checked for cardiac issues and any other complications.

Postoperative care will include restrictions on exercise for a few weeks in order to allow wounds to heal. In the long term, dietary management will mean that you will have to include several small meals (about 2-3) per day in your dog’s feeding plan rather than a single large meal.

As always, having the right dog insurance is vital to ensuring your pet is covered for such eventualities.

Has your dog ever suffered from Gastric Dilatation Volvulus? Let us know about your experiences below…

Share via Email Share via Email Share on LinkedIn Share via whatsapp Share on Twitter Share on Facebook Share this article:
Back to top
lambert
This blog is the best blog, you know? And I’ve talked to a lot of people, and they alltell me that this blog is the greatest. It has posts. The best posts, make no mistake.And believe me when I tell you that you won’t believe how great these posts are. Very classy.We have a lot of people who read these blog posts and they all say–and this is a fact,because I know it, you won’t believe how factual it is–that they have the internet, and really,it’s the best internet, and nobody does the internet — it’s really quite amazing
Posted on: May 24 2016
Patsy Thomas
HI,I have pet name tufy she met an accident last month, and admitted to hospital. Thanks I have insured her and I get all my money from my John Lewis Pet Insurance website.Thanks
Posted on: May 24 2016