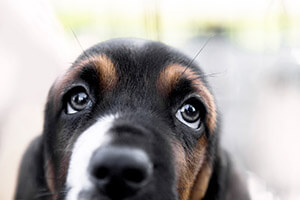 Do your dog’s eyes seem to be commanding a certain amount of attention? New research suggests that this is evolution’s way of influencing your feelings.

Scientists in the UK and the US have carried out a study comparing both anatomy and behaviour in dogs and wolves. What they’ve found indicates that the phenomenon of “puppy dog eyes” is, in fact, an anatomical change brought about to facilitate better communication with humans.

Petplan takes a look at some of the research findings in more detail...

The question concerning whether pets really have emotions is debated to this day. However, the aforementioned study results emphasise the idea that dogs can at the very least imitate emotional responses so that they better appeal to humans.

The research suggests that dogs have evolved muscles around their eyes, which allow them to make expressions humans find particularly appealing. These, in turn, cause dogs’ eyes to appear larger and more infant-like, eliciting a strong desire in humans to look after them.

Given the label of “expressive eyebrows”, researchers go on to explain that they create the illusion of human-like communication. Dr Juliane Kaminski at the University of Portsmouth, one of the study’s co-authors, says that humans would then have an “unconscious preference” to protect and breed from dogs with such an appealing trait, creating an evolutionary advantage and reinforcing this change in future generations.

Similarly, the findings show that this facial change has developed over thousands of years of dogs living alongside humans. Examining dog history and evolution closely, the experts are confident that expressive movements are deliberate (as in, intended for human consumption).

Lead anatomist Professor Anne Burrows, at Duquesne University, Pittsburgh, USA, another of the study’s co-authors, says: “To determine whether this eyebrow movement is a result of evolution, we compared the facial anatomy and behaviour of these two species and found the muscle that allows for the eyebrow raise in dogs was, in wolves, a scant, irregular cluster of fibres.

“The raised inner eyebrow movement in dogs is driven by a muscle which doesn’t consistently exist in their closest living relative, the wolf.

“This is a striking difference for species separated only 33,000 years ago and we think that the remarkably fast facial muscular changes can be directly linked to dogs’ enhanced social interaction with humans.”

A spokesperson for the university further elaborates that the only dog species in the study that did not have the muscle needed for creating such expressive movements is the Siberian husky, among the more ancient dog breeds.

There’s evidence to suggest that dogs are already adept at reading humans’ body language. Now it’s clear that they may also have undergone a rapid evolutionary change, and in the process made themselves more appealing to people.

When it comes to understanding dog language, we’re not too shabby. And we now seem to have a credible scientific explanation as to why.

This research opens so many doors where discussing the relationship between dogs and humans is concerned. Of course, there’s no denying that “puppy dog eyes” – those soulful, innocent expressions – can sway even the most hardened human. Which, apparently, is exactly what evolution intended.

Does your dog tend to get their way by making adorable eyes at you? Let us know in the comments below...