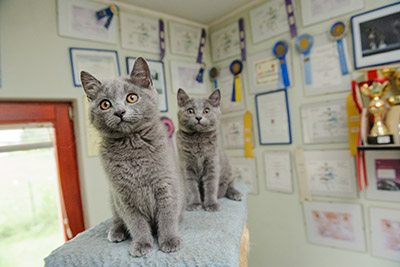 Cats really are incredible creatures - although we often think of them as a common pet, their skills and natural abilities go far beyond what we might think. Sure, it’s astounding to see them land on all fours, or leap up a six-foot fence in a single bound, but did you know that cats roughly spend just three years of their life awake? Or, rather conversely, that on average cats can run 3mph faster than Usain Bolt? No? Well, that’s why Petplan has decided to investigate world records set by cats. Take a look at this list and prepare to be amazed.

Longest Jump by a Cat

The longest jump by a cat ever recorded, according to the Guinness Book of World Records, measured at 213.36 cm or 7 feet. That might not seem like much to us, but just think, that tiny cat jumped a distance longer than Lebron James lying down, over four times the cat’s own body length.

The record was set on January 30th, 2018 by then ten-year-old, Waffle the Warrior Cat in Big Sur California, USA, and saw Waffle making a tremendous leap from one kitchen stool to another.

For comparison, the human world record for the long jump was set by Mike Powell in 1991 with a distance of 8.5m, almost five times his own body length, proving that this cat was up there with the best of them.

In 1988, reclusive antique dealer Ben Rea passed away, and upon his death he left behind a whopping £7 million fortune to Blackie the cat. Rea shared his mansion with 15 cats, with Blackie being the only one that managed to outlive his owner.

Refusing to leave a penny to his family, Rea’s money was divided between several members of his staff and three cat charities, with the explicit instruction of looking after Blackie, making Blackie the cat the richest feline in history.

Bizarrely, in a strange twist of fate, Rea’s sister Dorothy left £2.8 million to several other cat charities after she passed away, just days before Ben.

We commonly think that cats have nine lives but this particular feline seems to have lived nine lifetimes!

Crème Puff, a domestic cat from Texas is currently the oldest cat ever known and records indicate that she lived for an astonishing 38 years and three days from 1967 until 2005.

In another strange coincidence, Crème Puff’s owner, Jake Perry, was also the owner of Grandpa Rex Allen, another cat who held the record of oldest cat. Grandpa was claimed to have been born in Paris in 1964 before passing away in 1998 at the ripe old age of 34 years and two months.

The record for the longest whiskers ever recorded on a cat is held by Missi, a Maine coon all the way from Finland.

Missi, who lives with her owner, Kaija Kyllönen, had her whiskers measured at 19cm (7.5in) in 2005. For context that’s roughly the same length as a Toblerone!

A cat’s whiskers are a source of one of their seemingly many super powers. Whiskers function almost like antennae and are acute touch receptors that send tactile signals to the brain, giving them excellent control over their body and limbs. For this reason, it’s important never to trim them as it can cause confusion and disorient your pet. Plus, you never know, maybe one day your cat’s whiskers will even beat Missi’s record.

Are there any record-holding cats that you think should be included in this list? Is your cat capable of setting its own world record? Let us know in the comments below...