Stories from the surgery: treating cataracts and Lenticular Sclerosis in dogs 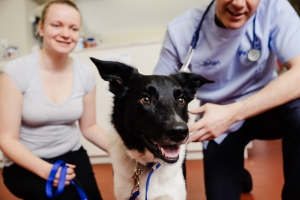 Petplan vet Brian Faulkner has once again taken time out of his busy schedule to tell us all about some of the strange, funny and sometimes difficult cases he encounters in his surgery.

This month, he tells us about how one very innocuous condition is regularly being mistaken for a far more serious one...

Last week I met Tyler, an eleven year old Labrador whose owner brought him into the surgery after noticing a change in his eye colour and with the suspicion that he had cataracts.

However, after an examination I was thankfully able to inform them that their dog had Nuclear Sclerosis – a far less serious condition.

This is the latest in a long line of similar cases, so I feel it’s time to explain the differences between cataracts and Nuclear Sclerosis to hopefully put some minds at rest.

What is Nuclear Sclerosis?

Nuclear Sclerosis occurs when new fibres grow on the outside of the eye lens, causing the older fibres to push together, altering the colour in the eye and forming a haze. This creates a cloudy grey-blue appearance to the lens which looks remarkably similar to a cataract.

This usually occurs as a dog ages, most commonly starting between 6-8 years of age. It is common for this to be unrecognised until much later as it is not always obvious early on.

Nuclear Sclerosis is painless and does not require treatment.

However, if you do notice any change in your pet’s eyes it is vital to get them checked by a vet as soon as possible, as a simple ophthalmologic (eye) exam will be able to distinguish between this and the more serious possibility of cataracts.

The most common symptom of cataracts is a bluish grey or cloudy appearance to the eye. This is where confusion between cataracts and other eye conditions occur because they can appear very similar.

However, a cataract is a term used to describe an opacity to the lens across a dog’s eye which causes blurred vision to occur. The size of a cataract can vary but they usually tend to be small which shouldn’t overly disrupt vision.

Yet, the size and thickness of cataracts can change over time, so it is important to monitor them, as blindness can occur in extreme cases.

The condition is often inherited but also occurs with age, trauma and diabetes.

How are cataracts treated?

If cataracts are diagnosed in your dog then loss of vision can be reinstated through a surgical procedure which removes the affected lens and replaces it with a prosthetic one.  Whilst this isn’t something many first opinion vets would do, it is a relatively routine procedure to a veterinary ophthalmologist and carries a high success rate.

How can I prevent cataracts?

While there is no guaranteed way to prevent cataracts, there are steps you can take to minimise the risk. These include:

If your dog does develop cataracts, having the right dog insurance is vital to ensuring your pet is covered for such eventualities.

Has your dog been diagnosed with cataracts? Or do you have a story to share? Leave a comment below…