The dangers of 'hidden' testicles 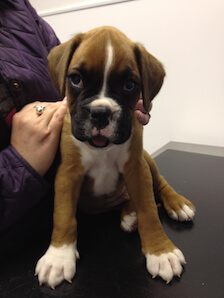 Following on from last week's piece on pet neutering, vet Marc Abraham discusses the important topic of cryptorchidism - a condition that can lead to all sorts of complications in male cats and dogs

It's important to recognise if your pet's 'bits' look different to other pets, as these differences can lead to serious life-threatening conditions.

I'm talking about 'hidden' testicles - unsuccessful travellers on a developmental journey starting from right up near the foetal kidneys and reaching a final destination of the scrotum about seven to 10 days after birth.

The condition of hidden testicles - or cryptorchidism, derived from Greek words crypto meaning 'hidden' and orchid meaning 'testicle' - affects both cats and dogs, although it's much rarer in our feline friends, with Persians seemingly most affected. Testicles absent from the scrotum by six to eight weeks coupled with the classic tomcat signs of urine spraying, enlarged jowls, spines on the penis (which usually regress within six weeks after castration) - mean that it's likely that they are either still within the abdomen or, more commonly, just beneath the skin of the cat's inner thigh.

Cryptorchidism occurs in one in 10 dogs, with English Bulldogs, Boxers (pictured above) and many small breeds most commonly affected. Confirmation by examination may prove difficult, with some cases benefiting from waiting until puberty (at five to 12 months, depending on breed) before a definite diagnosis can be made of one or both testicles being undescended.

By far the biggest problem with abdominally retained testicles is an increased likelihood of them turning nasty. The rates of testicular cancer are nearly 14 times higher in dogs with cryptorchidism, making it extremely important to locate and remove the undescended testis and castrate the successfully descended testis at the same time.

Patients suspected of having cryptorchidism often show hair loss due to the production of excess male hormones - this is easily detected by a simple blood test and ensures any risk of related cancer can be detected. With rescue dogs, for example, a full veterinary history may not be available, so attempts to locate already removed abdominal testicles aren't necessary.

Even with recent advances in DNA testing, the genetics of cryptorchidism are still not fully understood. Nevertheless, affected dogs should never be bred from and should always be castrated. More importantly, the genes responsible for cryptorchidism can be carried by both sexes, so both parents should also avoid further breeding, too.

Next week, it's the turn of the girls as we look at the female reproductive disease of pyometra - infection of the uterus.

Share via Email Share via Email Share on LinkedIn Share via whatsapp Share on Twitter Share on Facebook Share this article:
Back to top
calvin klein underwear uk
This article is really a fastidious one it helps new web users,who are wishing in favor of blogging.
Posted on: June 25 2013
battery r451c m540 samsung
Every weekend i used to pay a visit this website, because i want enjoyment, for the reason that this this website conations really nice funny information too.
Posted on: November 04 2014
Danielle
however you don't cover this condition if you puppy is over 12 weeks.
Posted on: March 08 2016