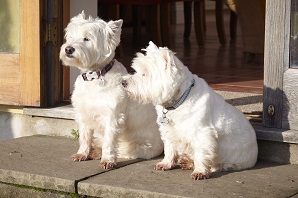 There are many aspects that potential dog owners need to consider before acquiring a dog or puppy and each breed has their own unique personalities and health care needs.

Petplan takes a look at the origins, temperament and common health problems of the West Highland White Terrier…

As their name suggests, the West Highland White Terrier originated from Scotland and was originally used to work game.

The breed descended from a number of breeding programmes of white terriers in Scotland and in 1908 the breed as we know it today was born and bred by Edward Donald Malcom (16th Laird of Poltalloch). Edward wanted to breed a white terrier versus the reddish/brown terriers of the time who were often mistaken as foxes and shot. With no interest in being known as the creator Edward insisted the breed be called the West Highland White Terrier.

The average lifespan of the Western Highland Terrier is between 12 and 16 years.

Commonly known as the Westie, their temperament can vary largely from dog to dog.

They are fiercely loyal dogs who make strong bonds with their owners and show off their self-assured disposition through their possessive nature. They can be stubborn which can lead to issues with training.

On the whole, they can be tolerant and work well in an established family environment. However, they do not enjoy being handled roughly, which needs to be considered in a household with young children. Of all the terrier breeds, the Westie is undoubtedly one of the most jolly and sociable.

How much exercise a West Highland White Terrier needs:

With the drive of being a game-working dog, they are a very active breed and are often on the move. They require a regular amount of exercise for a small dog – about half an hour twice a day.

Due to their chase instinct they love to play with toys and enjoy nothing more than chasing a ball around but, as their possessive nature suggests, they often prefer playing alone with their owner rather than in the company of other dogs.

On the whole, they are a resilient little dog. However, the breed can be more susceptible to the following health conditions:

This is an inherited bone disease, commonly seen in the breed, whereby the bones in the skull and jaw develop lesions which results in irregular enlargement of the bones. It normally occurs before the puppy reaches a year old, and typical signs include swelling of the jaw and pain on eating and opening the mouth.

Diagnosed with an x-ray to identify the thickening bone, the condition is typically treated with anti-inflammatory medication. Often after the puppy’s first year the lesions can resolve, although some dogs may have permanent difficulties with eating and using their mouth.

Terriers often suffer from skin conditions which cause inflammation and reddening of the skin. It typically presents as an allergic reaction with a thickening of the skin which can lead to hair loss.

The treatment relies largely on the cause of the condition (it is generally caused by environmental allergens such as grass, mould spores or house dust mites, so it’s vital to consult your vet to ensure your dog receives the correct treatment.)

This is a disease of the brain and spinal cord and causes tremors and muscle weakness, making it difficult to walk. It is typically seen between 2-6 months old and progresses rapidly.

As it commonly occurs in Westies, it is important to not breed dogs who are carry the condition in an attempt to eliminate it. Dogs can be tested via a simple DNA test.

As with all health concerns, it’s vital you consult your local vet and that you have the right insurance to ensure your pet gets the best care possible. Visit Petplan’s dog insurance page to see which policy is right for your dog.

Have you got a West Highland White Terrier? Have you got any advice for anyone considering getting one? Let us know in the comments below…

July 28, 2016 Share via Email Share via Email Share on LinkedIn Share via whatsapp Share on Twitter Share on Facebook Share this article:
Back to top
Jane Gilliam
Bought our Westie from a Registered Breeder.Initially she was quite aggressive towards me( only female in the house), Sought advice from a Vet & also took her to dog obedience classes & pleased to say this problem is now resolved. Lola has bought so much love , fun & laughter into our house, we can't imagine life without her now! ?❤️?
Posted on: August 03 2016
Emma Middleton
Good points covered here. It might also be worth mentioning that (in my experience) Westies do also seem more susceptible to hyperadrenocorticism (Cushings disease) and Keratoconjunctivitis sicca ("Dry eye") - both are treatable conditions but they do require medications for life. Not to mention Legg-Calve-Perthes disease, which is seen more commonly small breeds like Westies and Yorkshire Terriers.Emma Middleton BVSc MRCVSVeterinary Surgeon
Posted on: August 05 2016
Max Clayton
This is a great dog breed. white Terrier is cute and adorable.You are right about even though they have small sizes, but they are quite active.I got friend owned one, named 'Lucky' and he is very smart and obedient. :)
Posted on: August 11 2016
Peter Denies
Excellent blog. This blog has a lot of information regarding my needs. I’ll defenately put it to good use.
Posted on: September 01 2016
Karen Maynard
I have 2 Westies, both are very different characters. One is outgoing and naughty and the other is quieter and more gentle. Both have been well socialized and love people.They are definitely very active, love playing and they both have personalities that are bigger than they are. Chasing balls is a great pastime, so are squeaky toys and they love chasing pigeons. They are very comical when they are together and they love each others company. They are good with other dogs, as long as there are not too many of them, they can cope with 8-10 in a group but any more than that they get nervous. I wouldn't be without my girls. I can definitely recommend this breed to others.
Posted on: October 24 2016